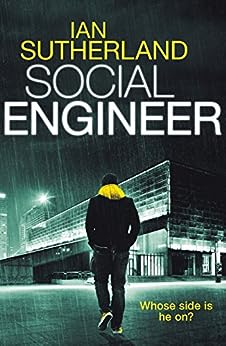 Not all hacking involves computers

Meet Brody Taylor. By day he’s an unassuming IT independent contractor. By night, he is Fingal, elite white hat hacker. Brody performs “penetration testing” for clients who independently contract him and then report his results upon completion so the company can take action to close any vulnerable gaps in their security. Recently hired by a pharmaceutical company, Brody finds himself in an ethical dilemma he hasn’t previously faced. In an effort to woo his activist girlfriend, Brody will do almost anything… and that may be the problem.

This book was not at all what I had expected but I was pleasantly surprised. I really loved how the story skipped back in time and then forward to the present to give the reader more of a feel of everything that was going on in Brody’s life at this particular moment in time. I helped to reveal some of possible motives for his actions.

Also, it never occurred to me that sometimes a company’s weakest point isn’t the computer system, but the very people who work for them. Social Engineer beautifully illustrates what can happen when companies who deal in sensitive data aren’t vigilant in their personal interactions. On the flip side of that coin for our white hat hacker, we also see a prime example of the setbacks of leading a double life.

As far as the “thriller” label goes, I’m not sure this book can described as such, but it is a good groundwork for the next book in the Brody Taylor series “Invasion of Privacy”, which yes.. I did download and dive into immediately after finishing Social Engineer.