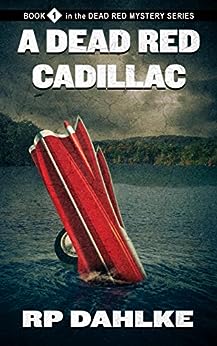 Lalla Baines is pushing 40 and in a rut. With two failed marriages and a modeling career gone awry under her belt, she’s found herself back at home heading up her father’s Aero-Ag business.  After being bested by the town widow in a jam making contest, Lalla becomes the prime suspect when her opponent is discovered “fins up” in the driver’s seat of her prized cherry red Caddy in the middle of a lake. With the help of her best friend, and a little rogue sleuthing of her own, Lalla needs to prove her innocence in hurry. But the true culprits are watching and are dead set on not letting that happen.

I downloaded this title a few years back and finally decided to read it for a change of pace. The beginning was a little slow, but picked up nicely once the body was discovered. Like all good mysteries there was a twist (or three) and the hometown aspect was also pretty neat. But with this being said, we see that even the smallest of small town can old skeletons in their closets. The further the story went, the deeper the mystery, the suspects and the possibilities.  All in all I really don’t have anything negative to say about the book or the story. It’s a nice read that’s a a little bit Cozy and a little bit Comedy with just a hint of romance.