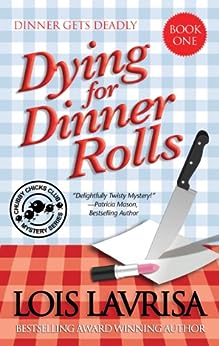 Chubby Chicks on the Case!
After Cat Thompson’s father was brutally murdered in their family owned grocery store she finds herself helping her mother and husband run the business. With the murder unsolved, Cat’s only clue is a strangely filled out crossword puzzle found at the scene. When one of her closest friends also turns up dead after finding a similar crossword puzzle, Cat begins to suspect that there may be a killer on the loose in Savannah. With the help her friend, Annie Mae, Cat sets out to hunt down her friend’s and possibly her father’s killer; but will Cat and Annie Mae’s amateur Nancy Drew escapades lead to them being the next victims?
I decided to switch over to a Cozy after months of reading post-apocalyptic novels because I just wanted a book that wasn’t so dark. This is the first of the “Chubby Chick’s Club” series, by Lois Lavrisa, and I really enjoyed it. Sure, some of the characters are over the top and kitschy, but it is a Cozy after all and I have yet to read one that isn’t even just a little campy. Overall this was a really fun read that had me laughing out loud at the antics of Cat and Annie Mae, as these are things that I could easily picture my friends and I attempting. While the end wasn’t such a huge surprise or twist, it also wasn’t something that wasn’t telegraphed from the third chapter either. I think tossing in the fact that there were two murders with possibly the same person assisted in keeping to reader guessing.
Yes in the end, Cat’s father’s killer is still a mystery, but there are at least 2 more books in the series. I have a suspicion as to who the culprit may be. I’ll definitely be reading the other Chubby Chick’s Club  books to find out if I am correct.