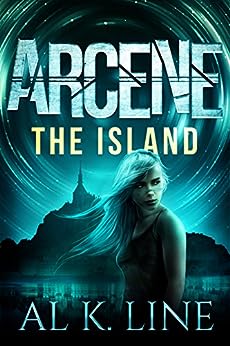 Trouble and Adventure seems to follow this girl everywhere

Full disclosure, I was provided a copy of this book by the author in exchange for an honest review.

Arcene: The Island, the second book in the series by Al. K. Line, follows Arcene from the Commorancy series as she leaves the relative safety of her home behind for a vacation of sorts and time away from her friends and her child.

The Island picks up immediately after “The Blue Castle” ends with Arcene looking to get home and leave the horrors of the Castle and its strange inhabitants behind. After getting caught in a horrible storm along the way Arcene and Leel are dumped unceremoniously in a forest while her transport continues on without them. Finally managing to make their way to the coast and commandeer a boat in an effort to visit a nearby island before making their way home, they are swept out to sea only to arrive at a second Island days later.

If Arcene thought the inhabitants of the Blue Castle were weird, she hasn’t seen anything yet. After being “Judged” for what is seemingly a minor infraction, Arcene and Leel find themselves transported back to the mainland as the “Prey” in a bizarre televised hunt for the pleasure of the Island’s population. Can Arcene and Leel survive?

Overall I really enjoyed this second offering in the Arcene series and having not yet read the parent series, it wasn’t hard to follow along or pick up on the subtleties of this “world”. There is enough back story provided to keep the action moving without getting bogged down in details. Quite a few new characters are introduced who possess “Awoken” abilities which really helped also to understand the concept and what the Awoken can and cannot do. I noticed what appeared to be a sort of friendship developing between Arcene and Talia and I would love to see what kind of trouble these two could get up to if left to their own devices.

Yet another great story that left me curious to see where we go from here.