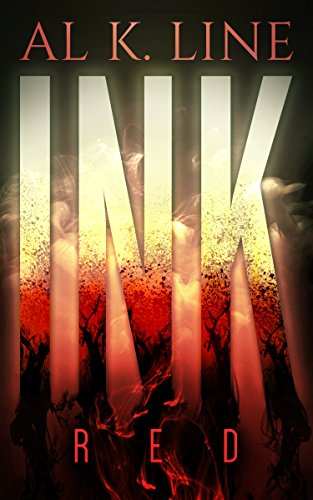 INK: Red follows the story of Edsel (don’t call him ED) through a world approximately 7 years into the global plague known as “The Lethargy”. Kidnapped by The Church of the Eventuals, a religious cult of sorts, he is forced to undergo “the Ink” which consists of tattooing every exposed centimeter of skin a bright red hue. Edsel manages to escape before his inking is complete and returns home only to find his beloved Kathy murdered by the church’s fanatical followers. Wracked with grief, guilt and rage at what he has endured and lost along the way, Edsel sets off to seek his revenge on the Bishop and tattooists who have ravaged his body and murdered his Kathy.

Along the way, Edsel encounters a young boy named Aiden and an older man named Bob, who is himself afflicted with a form of The Lethargy but hides his affliction in order to assist Edsel in his efforts. Together they form an unlikely bond on a quest to seek a measure of retribution against the Church and their followers.

It should be noted that while this book is set in the same world as Al’s “Commorancy” series it appears to be a separate storyline that happens to take place during the same time. While The Commorancy and concepts such as being “Awoken”, “The Noise” and “The Void” are all mentioned they are adequately explained within this story-line so you don’t feel like you’ve missed anything by not having read the other series.

Overall, this book was a very fast paced read with more than its share of cringe worthy moments as Edsel’s condition is described in detail. While the ending was to be expected, there also was an unexpected twist that had me yelling “WHAT!” at my kindle. Overall I very much enjoyed this book and an looking forward to reading the next two books in the series.