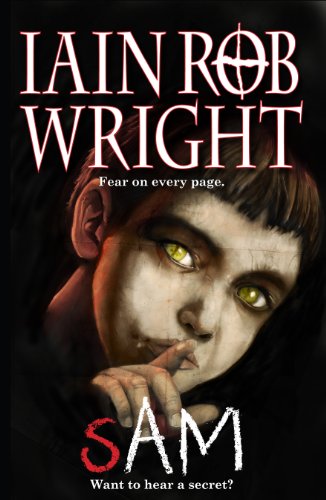 I really wanted to read Sam partly in an effort to overcome one of my fears and also because Iain Rob Wright is fast becoming one of my favorite authors.

As a rule, I do NOT do demonic possession books. Give me the crazed slasher, chainsaw wielding stalker with the equally crazy family AND throw in a horde of zombies or 4 and I’ll eat that stuff up but demons? NO WAY! I guess it hits too close to home.. something that’s too feasible.

That being said, I really wanted to read Sam partly in an effort to overcome one of my fears and also because Iain Rob Wright is fast becoming one of my favorite authors.

While the story had pretty much all the Hallmarks of a typical demon possession story and included several cringe-worthy moments, this wasn’t horrible in the least. I actually expected much more graphic scenes and truly was thankful that they were not included.

I would almost say that for a mom of 2 under 10 I read this book in record time (I think it took me 2 days). I was even up at 2 am on a few occasions reading a chapter or three before going back to sleep. Throughout the story I found myself sympathetic toward several characters including Jessica, Sammie, Mike, Frank and finally Angela. Everyone had a secret and those secrets were all eventually exposed.

The concept of a possession other than a demonic entity was also unique and Sammie’s secret could easily be parlayed into a book 2 that I would like to read.

So yeah, for the first “demonic themed” novel that I have read in like ever it was very good.