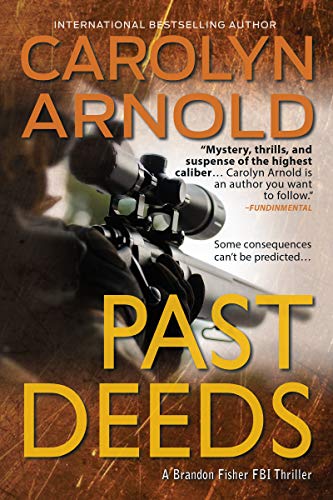 Full disclosure, I was provided a copy of this book by the author, however, I have voluntarily chosen to write a review. All opinions are my own.

In a wealthy area of Arlington, Virginia a prominent prosecuting attorney is gunned down coming out of a high-end condo building. With no apparent suspects, Brandon Fisher and his team from the FBI’s Behavioral Analysis Unit are called in to work the case, but the clues are scarce. Why would a sniper target this one person? Was this a hired hit from a past defendant, the revenge act of a cheated-on wife, or just a random event? As they begin their investigation it is clear that Brandon and the team need to find a linking factor, but it’s not until their analyst back at base begins to put together a series of breadcrumbs that the picture slowly begins to form. A race against time begins as Brandon and his team is split up to chase down leads from California back to Maryland in an attempt to find and apprehend their sniper before she can kill again.

Past Deeds is the eighth and newest installment in the Brandon Fisher FBI series by author Carolyn Arnold and the first one that I have had the opportunity to read. Even coming into an obviously established series with fully fleshed-out characters, and a few with sordid pasts, I still did not feel as if I was missing any of the backstories. Arnold does a great job of quickly catching up the new reader with just enough character history along without the narrative becoming bogged down in the details.

In this installment, Brandon Fisher is reunited with a face from his past in the form of Paige Dawson while Jack takes on the mentoring of the new addition to the team.  As I read through the book it seemed to me that Arnold was telling two separate, but still related stories as the team struggle with their own personal problems and issues all while working the case. For some, it seems that the case may also hit a little too close to home and watching Arnold weave these elements in, mostly through the use of first-person narratives, really sucked me in and made it very easy to visualize all of the action.

If you are a fan of police procedurals of any kind, Past Deeds will not disappoint, and I would definitely recommend giving it a read. With this being my initial introduction to Brandon Fisher and his team, I am hoping to circle back and read some of the prior cases in this series.