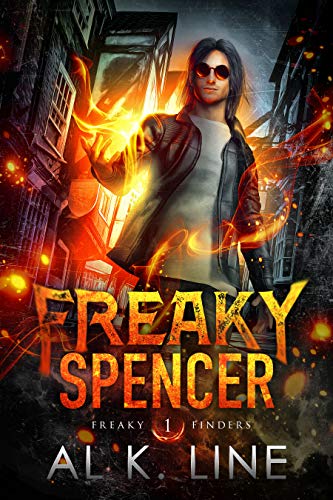 Full Disclosure – I was provided a copy of the book by the author as a member of his “A-Team”, however, I have voluntarily chosen to write a review. All opinions are my own.

Running from the Devil

Freaky Spencer isn’t your average Odd One and that says a lot considering who he is. Born into the world by spectacular means (and it’s a story he loves to tell whether you care or not), Freaky is currently a bounty hunter and a darned good one, but his current “employer” really burns his butt. Equipped with a hellishly magical tattoo that summons him to the pit at a whim, Freaky has found himself in the employ of Beelzebub himself.

After he is charged with locating Mimi, a powerfully deadly bounty hunter in her own rite, Freaky learns that all dealings in the underworld haven’t always been on the up and up. But after Freaky and Mimi team up, they find themselves the targets of not only a vindictive lesser demon but also of the big man himself.

Al K. Line is back with a new series and an entirely new cast of characters to entertain us. After having previously read my way through the Dark Magic Enforcer and Wildcat Wizard series I was wondering if Line could think up a new protagonist that’s equally as entertaining as the previous ones. I shouldn’t have been worried as Freaky, Aunty, Boris, Hanna, Furball, Mimi and girls have definitely stepped up to fill in the void left. To say that Freaky Finders was fast-paced would really be an understatement as the term “breakneck” is probably a better fit. The things that this crew goes through in the short span of time this book covers is truly enough to make anyone’s head spin. For me, this was a really strong start to what promises to be another entertaining series. I am looking forward to what other adventures this oddly freaky Scooby-Doo reminiscent crew gets into in the upcoming installments.