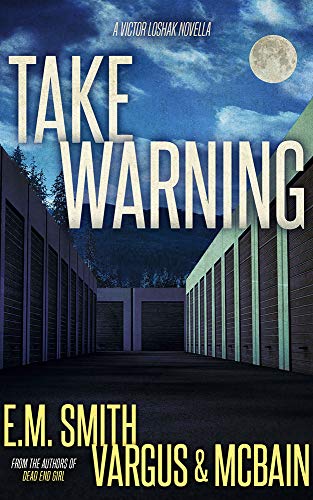 Take Warning is the newest in the Agent Victor Loshak series by Tim McBain and LT Vargus in collaboration with fellow author E.M. Smith. Loshak and Spinks have returned to their home bases after the series of events that took place in What Lies Beneath, but the reality of Kansas City still haunts Victor. By day, he continues his duties at Quantico serving as a consultant long-distance for a murder case, but at night he’s holed up in a rented storage unit poring over the details of the Kansas City case more and more. When his off duty investigating earns him a warning that hits too close to home, he knows that there is more to this story. The question is, will he risk all he holds dear including his recently mended relationship with his ex-wife to find the truth?

I noticed that unlike “What Lies Beneath”, “Take Warning” does not have a  tag line such as “Victor Loshak #3” and while it’s technically the third book, it’s really short enough to almost qualify as a short story or novella, so possibly McBain and Vargus decided to provide this little bonus installment to tie up some of the loose ends from What Lies Beneath and also whet our appetites for the next full book in the series. Aside from the serial killer history lesson which I really enjoyed (yeah, I’m sick), I also was glad to see Victor’s ongoing obsession with the human trafficking ring that was discovered in Kansas City as well as the fate of Dylan and his family. I think it added yet another facet to this already wonderfully flawed character that shows that while he is a man of the law he is not without compassion. Couple that with the stonewalling he is receiving as he attempts to continue to investigate after the fact including personal threats and it is very clear that there is more here than anyone in the upper echelons want revealed. Victor’s decision point at the end of this story is both inspiring and terrifying. With the story development and build up that Take Warning has provided the current case, I am pretty positive that the next installment will be truly explosive, and I hope it comes with some resolution and justice to the victims of Kansas City.

Even though Take Warning is a continuation/follow up to the previous book in the series, I believe it is still possible to read this one out of order of the previous books. Even though this installment references previous events I don’t believe that a new reader to the series would be too lost. If anything, I feel it could when the appetite to go back and read the earlier case to catch up on the Loshak/Spinks duo.