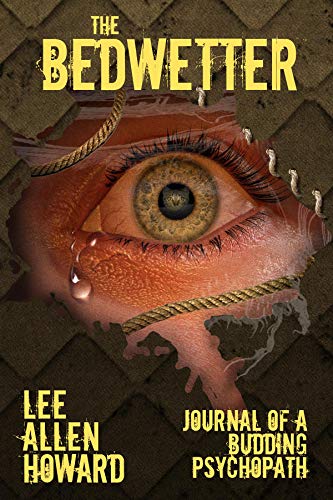 Russell Pisarek has not had an easy life. Raised by an overbearing mother and a passive father, Russell has been the victim of countless hours of cruel punishment all because of a bedwetting issue. Growing up in such an environment has led to a life of drugs, debauchery and an intrinsic desire for retribution; against those who mocked him, those who hurt him and sometimes even those who just happen to be sitting in the wrong seat. Russell can definitely be described as a loose cannon with an appetite for the bizarre, but he can usually keep it in check. That is until the dreams start to return, and his issues begin anew. Finding himself being tossed out of his sister’s house Russel sets out to make a life for himself, but when his desires and fantasies start to take over his reality things get difficult. Finding himself alone and on the run, Russel sets out to right all the wrongs done to him, but what he doesn’t know definitely will hurt him.

While Bedwetter: Journal of a Budding Psychopath is not the first book released by author Lee Allen Howard, it is the first one I have been exposed to. While not a long book, Bedwetter takes you inside the head of a truly twisted individual via what I can only describe as his private journal entries. I hesitate to say “diary” and clearly, the author did as well, but this book is still just as personal as any diary ever was. While there are no dates to mark the separation of the entries, the text does feel less like one is reading a narrative and more like the central character is speaking to you. Filled with Russel’s personal thoughts, opinions complete with slang and musings, the language can be gritty at times but that made it all the more real for me. Howard managed to paint Russell as someone the reader can pity one minute and be extremely terrified of the next.

While not for those with a “puritan” view on their readings if you like dark, psychological thrillers that will have you at times reading through your fingers as you cover your face in shock, I would recommend Bewetter.

One thought on “A review of: “The Bedwetter: Journal of a Budding Psychopath” by Lee Allen Howard”