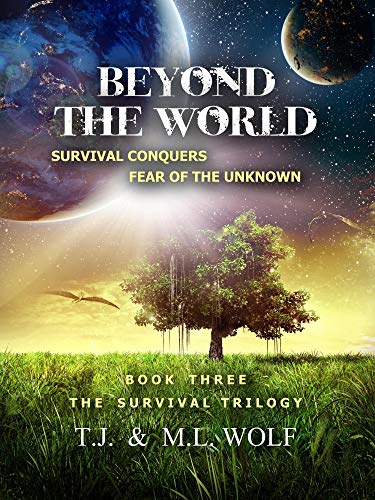 Beyond the World is the final installment in The Survival Trilogy by authors T.J. and M.L. Wolf. Picking up approximately a year after the end of “The Dragon’s Glare” Una and Major Ashcroft are on honeymoon in Yellowstone national park. While the duo is hoping for a relaxing time, Ashcroft quickly gets called away on military business and Una is left temporarily to her own devices. After she hooks up with a scout troupe on an excursion in Yellowstone, strange happenings start to occur. With her husband temporarily unavailable, Una calls in Jack for help, and the trio of life long friends are once again united in what ends up being an adventure of a lifetime and one will leave a lasting impression on all parties.

For Science Fiction fans who are particularly interested in extraterrestrial life, if you haven’t read this series, what are you waiting for?  The duo of T.J. and M.L. Wolf have done an amazing job of crafting a series of speculative fiction that will get the reader thinking or, in my case, looking up events and locales to learn more about the subject.

With Beyond the World, we are introduced to the line of logic that not only are extraterrestrial beings real, but they have been among us the entire time. This is also hinted at in the second novel, “The Dragon’s Glare”, but I really love how this story includes not only a face to face encounter with the alien beings but also reasoning behind why they are here. It makes the reader (or at least me) think about the bigger picture and I feel that it is the mark of a good author when they can accomplish this. I would have to say that Beyond the World was my favorite of the three novels because the action was fairly quick to start and moved rapidly after that. While one could read this as a stand-alone novel and not be too confused with plot or characters, truly this works best as the climax to a series of encounters and events leading up to this final installment. Even if you are not a big fan of “alien fiction”, I would suggest giving this series a read. Even if you start out a skeptic, you may end up a believer in the end.