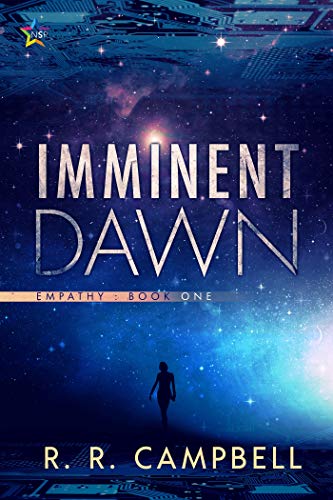 A cyber thriller that will stay with you

Imminent Dawn is the first book in the EMPATHY series by author R.R. Campbell. Set in the future, Imminent Dawn follows main character Chandra Adelhadeo as she volunteers herself up to be basically a human guinea pig for human trials for a cerebral implant known as EMPATHY. If she is a successful test subject, she may finally find a way to communicate with her comatose wife. If she fails, she could end up like her beloved Kyra or worse. As she sequesters herself in the Human/Etech research center with the other test subjects Chandra learns that the outer shell that is being portrayed to the world may not be the entire story. With test subjects falling ill and disappearing in the night and administration’s refusal to acknowledge these incidents as nothing more than anomalies Chandra finds herself stepping out of the role of the “face” of the study and more into the role of antagonist and conspirator. What was supposed to be a means to an end for Chandra to communicate with Kyra has turned into a nightmare that she may not be able to escape.

Imminent Dawn is a strong introduction into the world of the future as seen by R.R. Campbell. Set far enough ahead that AI and cerebral implants are feasible, but not too far as to have a heavily “sci-fi” feel there is a healthy balance between old and new. While the story is mainly focused on Chandra and her reasons for joining the study there are also sub-plots in play that eventually weave themselves into the overall tapestry of the narrative. As I read through, I was impressed with how Campbell structured the story and the events to lead up to the climax which was I could easily see played out in a television drama or big screen production. While there is a pretty definitive end point to this story, I still have questions about the fate of a few pivotal players. With the announcement of the next novel in the series “Mourning Dove” to be released later this year I am hoping to have many of my questions answered as I am sure that the story is far from over.

2 thoughts on “A review of Imminent Dawn (EMPATHY #1) by r.r. campbell”