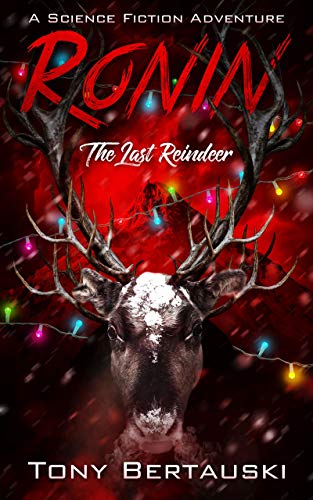 The Baddest of the Bad

Ronin (The Last Reindeer) is the newest Christmas themed novel by author Tony Bertauski. Having previously retold the tales of several beloved Christmas characters, Ronin follows the story of an orphan named Ryder Mack. After being discovered in the back of a moving van one Christmas Eve, Ryder has been shuttled from one foster home to another as strange instances always seem to follow him wherever he goes. When he finds himself placed in “Kringletown”, a sprawling half-million-acre ranch run by an eccentric man named Billy “Big Game” Sinterklaas which is also home to approximately forty other orphans, Ryder can’t help to wonder how he came to be in this place. It doesn’t take Ryder long to discover that the face Kringletown presents to the worldwide viewing audience is a carefully crafted illusion designed to detract from the true purpose of the compound. Billy is a man obsessed with the North Pole, who believes Santa Claus is real and who is certain that Ryder holds the key to him obtaining his biggest trophy yet.

Ronin is the sixth standalone novel in the Christmas themed novels by Tony Bertauski. I have read four of them to date and I am never disappointed in the way Bertauski can take a beloved, almost legendary, character and reimagine them in a fresh way. Ronin is no exception. Kringletown is a strange place and the stage for one of the biggest streaming shows on the planet where the “Naughties” and the “Nicies” are showcased daily, but the face that is shown is carefully crafted so the true nature and mission of Billy Sinterklaas are hiding in plain sight. Ronin is a take on the Rudolph character that is fresh and fantastic and is probably my favorite in the Christmas series to date. Yet again, Bertauski takes a familiar story, tosses in a dose of science fiction and creates a story rooted in legend but warped into modern times. For fans of this series, there are a few Easter Eggs along the way in the form of references to other novels, but even these are blended seamlessly into the story and become part of the narrative so those new to the series don’t feel like they are missing any important points. For those who are familiar with the series, however, these little nuggets provide the glue that solidifies the Claus world. With this newest offering, Bertauski has reimagined Santa, Frosty, Jack Frost, Ebeneezer Scrooge, the Heat Miser and now Rudolph. I can’t wait to see what other characters show up in future installments.