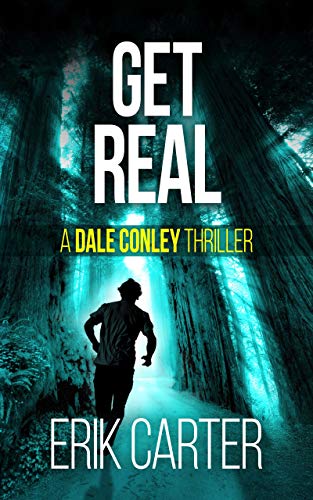 Get Real, the fourth in the Dale Conley series by Erik Carter follows BEI agent Dale Conley as he goes undercover in San Francisco to assist in tracking down escaped convict Jonathan Fair. The estranged son of one of the local crime families, Fair has escaped in dramatic fashion and has been spotted knocking off establishments of the rival family. Having eluded capture thus far, Fair begins leaving behind cryptic messages that hearken back to an event that occurred over one hundred years ago.  Conley sets out to unravel the mystery that spans a century and lives in the deranged mind of Jonathan as he tried to figure out if Fair is the actual mastermind behind the heists or if there is more than meets the eye.

Set in the 1970s, the Dale Conley action series is a fun romp through the past, back during a time before smartphones and Wi-Fi. Conley is a specialized FBI agent with a knack for sniffing out anything with historical implications, and the instance with Jonathan Fair is no different. Peppering in all manner of facts, well known and not, regarding the San Francisco Earthquake, Get Real is not only a great story but also a cleverly disguised history lesson.  Having Fair be not only the antagonist but also a bit of a cult hero in the city makes for a difficult time Dale as he encounters many enthusiastic imposters along the way. As Jonathan Fair’s story unfolds, and the full picture is revealed I started to feel sympathy for Fair and as the book reached its conclusion, it left me wondering if the ‘bad guy’ was aptly labeled or if he was a pawn in a much bigger game being played. Get Real is yet another in the line to fiction with a historical twist that Carter has on offer. I, for one, am looking forward to seeing where the BEI and Arancia take Dale for his next case.