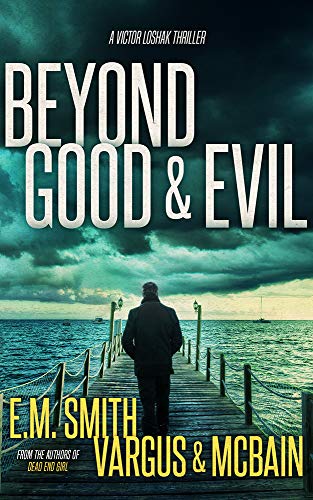 Beyond Good and Evil is the first in a new series by Tim McBain and LT Vargus in collaboration with fellow author E.M. Smith. Acting as an offshoot of the Violet Darger thriller series, Beyond Good and Evil features FBI agent and profiler Victor Loshak. Picking up shortly after the end of Bad Blood, Loshak finds himself in sunny South Florida in the capacity of consultant to a group of new cadets.  This lull in the action is short-lived, however, when he is contacted by a reporter from Miami. Recent murders have taken place in the tri-county area that is all pointing to a possible serial killer. After hearing the details of the case, Loshak takes a more active role in the investigation. Working with the local PD to track down a murderer, Loshak and Spinks form an unlikely partnership as they track the monster terrorizing the city.

With Darger on hiatus after the events in Bad Blood, Loshak strikes out on his own for this series and we see a much less confident Victor Loshak than in previous installments. While not initially in an official capacity, due to the nature of the murders his specific skills he finds himself quickly embroiled in the action. Without Darger to egg him on, Loshak is more pensive and aware of his status as a senior officer. This weighs heavily on his mind throughout the case and there are several areas where he experiences self-doubt at his ability to perform his assigned duties very much longer.  Call it wallowing in self-pity or becoming aware of his own mortality, but this is definitely a darker, more resigned Loshak than we have seen in previous books. If feeling his age weren’t enough, the agent also beings to sympathize with the reasons that his partner is currently on hiatus with a cynical resolution that some things may always be the same… even if they aren’t the right things.

I really liked how we got to know Victor Loshak as a person and delved more into his past in this book. The interactions between, Victor and his ex-wife coupled with his conversations with Spinks, the reporter turned kindred spirit and unlikely partner helped to really flesh out the character and provided the reader a glimpse into his psyche.  Although this book was a collaboration between McBain, Vargus, and E.M.Smith, it seems to have been a successful one. I am looking forward to more collaborations from this trio in the future.