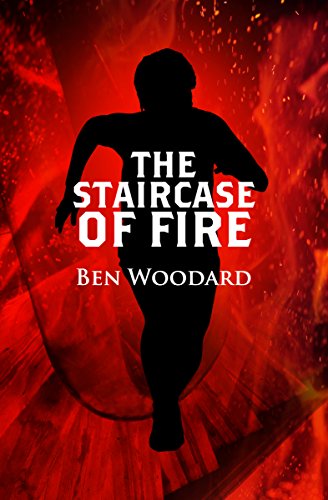 Full Disclosure – I was provided with a copy of this book by the author, however, have voluntarily chosen to write a review. All opinions are my own.
“The Staircase of Fire (A Shakertown Adventure Book 3)” is scheduled for a May 25, 2018 release

A thought-provoking coming of age story

The Staircase of Fire is the story of Tom, an orphan living with his uncle in Kentucky. Tom has had hard life thus far and is trying to pick up the pieces and move on, but after the accidental death of his sister followed by his mother succumbing to cancer shortly thereafter, Tom has a lot on his plate and he blames himself for all of it. If it weren’t for Tom’s friendship with James and his mother Rose, he probably would have run away or worse a long time ago. After Rose, a black woman living in the South, attempts to register to vote tensions flare and Tom finds himself front row to witness yet another tragedy in his life. If only Tom can find the legendary “lost Shakertown gold” he can run away from all his troubles and leave his past behind. Little does he know, his salvation lies not in some strange yet to be found future, but in his own integrity.

The Staircase of Fire is the first of the Shakertown Adventures that I have read and to be truthful, I was blown away. Author Ben Woodard paints a picture of 1920’s Kentucky that is both heartbreaking and nostalgic. Tom’s relationship with his cousin Will is refreshing. Their adventures as they try to track down the lost Shakertown Gold reminded me of Tom Sawyer and Huckleberry Finn and resulted in a few funny moments to brighten what for me was otherwise a fairly difficult book to take in. Faced with the stark reality of the racist South in the twenties, Tom’s journey isn’t just one of self-discovery, but also of understanding and is told in a way that had me laughing, crying and even cheering before the end.

After reading “The Staircase of Fire” I am tempted to go back and pick up the previous two titles to catch up on what I may have missed. I really would like to see more of the residents of Shakertown and their interactions prior to the events of this novel. If you like a thought-provoking story set within a historic background filled with characters that you will both love and hate, I highly recommend The Staircase of Fire. This will definitely be a title that I can see myself rereading in the future.