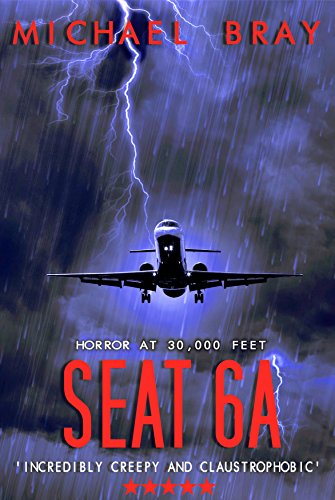 Cindy is a veteran flight attendant for American Airlines. Having worked herself up to head flight attendant in a short time, she is about to embark on her 500th flight. What should be a fairly routine flight with an old friend at her side turns into one of the most harrowing experiences of her life when she encounters the passenger in seat 6A. A man with eyes dark as pitch and evil emanating out of every pore; Cindy finds it hard to remain composed as she is overwhelmed with the feeling that the plane is going down. As the flight wears on and more flight crews interact with his mystery man, the fear spreads like wildfire until the crew are convinced that this man must be stopped before he takes the plane down.

Seat 6A, is a short story by horror author Michael Bray and, to be honest is the first short story in a long time that has left me with chills. The thought of a person so evil that you can see it on them like an aura is powerful. As the story unfolds and each of the flight crew interacts with this person, each one is changed. Even though this person is not doing anything other than sitting in his seat there is a conviction that the plane will not reach its destination and he is the reason why. There is a bit of a paranormal angle as the crew rallies to combat this person during the most vulnerable moments of the flight. In the ending moments, when the person’s identity and mission is revealed is sure to make the reader’s blood run cold.

While ultimately the subject matter is a sore spot for many people, the “what if” aspect of it all is truly chilling. What if, you were able to stop a tragedy, but in your success, you ultimately doom thousands more to the same fate? If you had to bear that knowledge, would you make another choice, or would you choose the same fate that Sylvia did?

As a speculative paranormal horror short with roots in historical events; Seat 6A is a chilling read. While not for everyone, it is definitely worth a look.