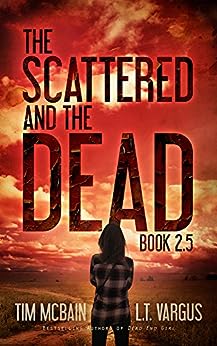 Letters from the Apocalypse

The Scattered and The Dead 2.5 continues the pre- and post-apocalyptic events from the prior installments and unlike the earlier books, I would not suggest attempting to read this one until you have read TSaTD 1 and 2 at the very least. (Or if  you’re like me and want the entire story you can always go for their newly released box set of all of the novels to date.)

Continuing the previous themes for the “half numbers” The Scattered and The Dead 2.5 provides more back story and world building around the central group of characters. This time Erin’s life in the evacuation camp prior to and shortly after the chain of events that decimate over 99% of the population is told in great detail in the form of letters to her BFF, Kelly. Here, we also see the inception of her sisterly bond with 8-year-old Izzy, as well as the series of gruesome events that results in the pair striking out on their own.

The other main story line is the journey of Delfino and Baghead. As Baghead is recovering from an intense physical trauma, Delfino is on his own in search of supplies and medication for his mysteriously shrouded traveling companion. While he is out, he decides to keep a running journal to chronicle his experience. Through the reading of this journal, we learn that this isn’t the first time Delfino has attempted to keep a diary of sorts. The narrative eventually shifts approximately five years in the past as the prior journal’s contents and events unfold.

This is not the first time that the dynamic duo of McBain and Vargus have used the first person, diary technique during this series and I find it quite effective. Particularly in Erin’s case;  her letters Kelly are peppered with humor, sarcasm, rambling and raw emotion in typical sixteen-year-old fashion. While it is not revealed what relation the “Rita” in Delfino’s flashback entries is to our humble narrator, it is clear from the tone and the familiarity that she must have been a person who held an important place in his life.  In the ending chapter, we also catch up with “Father” briefly as he, too, is putting thoughts to paper. So apparently, writing in the post apocalypse is a thing. Who knew!