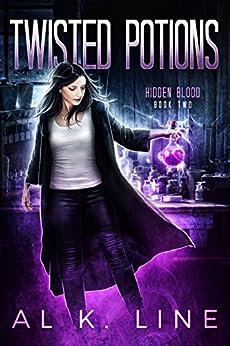 Full disclosure, I was provided an advance copy of this book by the author as part of his “A-Team” but have voluntarily chosen to write a review. All opinions are my own.

Something’s brewing and it isn’t good!

Twisted Potions is the second in the Hidden Blood series by Al. K. Line and continues Kate’s story as the first ever Vampire enforcer. Taking place shortly after book 1, we see Kate making good on her promise to make dinner for The Chemist. Having arrived at his house, things are going as well as can be expected until a seemingly innocent brush of a not so random test tube sends Kate and the Chemist running for their lives. The purpose of the potion is even more puzzling. The Chemist is tired of being a ghoul – a being so repulsive they are shunned by Regular and Hidden alike – and just wants to be a man. Feeling sorry for her friend, Kate offers to let him stay at her place while he makes a new potion, but upon completion of his task Kate realizes that she may have been duped. Now something more than a man, the Chemist has embarked on a mission to ensure that he will no longer be alone in the world. If he succeeds, it could spell trouble for Hidden all over the world. To make matters worse, Kate has also recently discovered that her and Faz’s dreams of becoming parents will soon be a reality. With raging hormones Kate must fight off rampaging ghouls, track down and stop her former friend from going through with his plans all before giving birth!

Kate continues to be a character to watch in this world. Now not only is she the first vampire possessing both hidden and blood magic but she is also probably the first of her kind in many centuries to become pregnant. And does she ever make a formidable “pregzilla” or should I say vampzilla? I love seeing her evolution from shy, newly turned baby vampire and one Spark’s best friends to wife, enforcer, protector and soon to be Mother. It is safe to say that Twisted Potions is a much darker read than Vampire Enforcer. As we get into more of Kate’s back story and the Chemist’s life in general it is evident that trauma and tragedy seem to be the norm for any Hidden.  Which can make things interesting because it lets the reader get into the head of the character. And I’m sure we’re only scratching the surface with the numerous Hidden in Cardiff. I mean, can you imagine what Grandma must have experienced that we haven’t even begun to learn of yet? All told yet another action-packed day in the life of an Enforcer and with the imminent appearance of Spark/Vamp progeny this story can only get better.