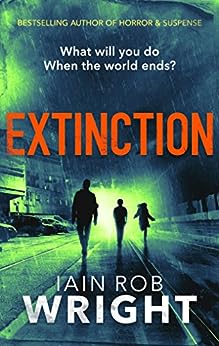 Full disclosure – I was provided a copy of this book by the Author as part of his Advanced Reader’s group, however I have voluntarily chosen to write a review. All opinions are my own.

The gates of Hell have opened. Demons and fallen angels alike roam the Earth freely laying waste to all in their path. Humanity has been reduced to a fraction of what it once was, but those who remain continue to fight. Guy Granger has succeeded in making the trip across the ocean from the US to the UK and is determined to locate his children. After landing in Portsmouth, he and a small group set out amid the destruction and demon armies to tackle the evil head on.

“Extinction” is the third in the Hell on Earth series by Iain Rob Wright. While the timelines for the first two books “The Gates” and “Legion” ran pretty much simultaneously, you definitely want to read one or both of those before reading this new one. “Extinction” is action packed from start to finish and for me there were quite a few “what the heck!” moments that had me laughing, crying and even screaming at my kindle. For anyone who is a fan of Iain Rob Wright this book will not disappoint.

One of the main things that I adore about this author is his ability to weave a handful of core characters throughout his stories. “Extinction” also has a touch of this element present, however for me to say more would be to spoil the entire book and I will not do that. If where will be a Hell on Earth 4 is hard to say. I can see where there is closure in this story, but there also appears to be several other stories that could spring from this this series. Until that time, I am looking forward to whatever Iain releases next as I am sure I will be blown away.