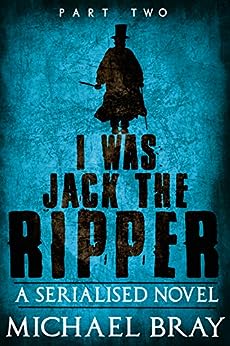 The Ripper is born

“I was Jack The Ripper “is the newest novel by horror/thriller author Michael Bray. Initially released as a test offering to members of his mailing list I have previously read the first three installments.   I was very happy to this serial resurrected so to speak for Amazon. Jack, is a serialized account of the life of one of the world’s most brutal murderers, and one that will keep the reader interested.

While the first installment covered the meeting of Edward and Mr. Hapgood and provided a timeline of his formative years, this installment covers the period encompassing what appears to be his late teens to early twenties. In this portion of the story we find Edward working alongside of his friend George in a hospital. It is here, that Edward meets the love of his life, Lucy. Edward and Lucy live happily enough, but Edward’s past haunts him and we learn the true depth of the damage that was done by his mother and father at an early age. As a result of these lingering issues Lucy leaves him, adding what appears to be the final nail in the coffin in the transition between troubled youth and cold-blooded killer.

I would say that in this installment, “Edward” symbolically dies and “Jack the Ripper” is born as we witness him taking his first not so tentative steps into notoriety. Bray’s writing during this time is so descriptive and vivid that I could almost smell the stench of the pubs, alleyways, filth and gore while reading through this portion of text.

While I personally felt that this installment was over too soon, it definitely left me in eager anticipation of the Part Three.