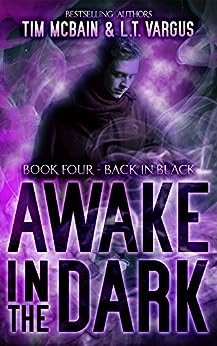 On the hunt for retribution

Back in Black, book 4 in the Awake in the Dark series by Tim McBain and LT Vargus, continues the saga of Jeff Grobnagger. Some time has passed since Glenn’s murder at the hands of Riston Farber and company in the astral plane and Jeff has effectively gone into hiding. Subsisting on a steady diet of vending machine junk and warm RC Colas, Jeff hides out in a rundown motel plotting revenge against his nemesis. When not brooding over his warm soda and stale Doritos, Jeff goes into “stalker mode” and drives around town attempting to locate Farber and kill him. With his only companion during this time being Ms. Babineaux, Jeff finds himself in a dark place filled with rage and obsession. When Babineaux is abducted by Farber, Jeff decides that it is time to end this thing for better or worse, once and for all. Either Farber dies or Jeff will, but he will not go down without a fight.

Wow! For all my disappointment at Jeff for not going after Farber in Red on the Inside, Back in Black makes up for it in spades. Jeff is determined, paranoid and a bit psycho. Still reeling at the brutal loss of what was most likely his only friend, having to cope with life without him and being on the run from Farber and whatever crazy sadistic end he has planned for him Jeff really has a lot to deal with in this one.  Truly parts of this were difficult to read as Jeff sinks deeper and deeper into a revenge fueled depression. Even his visits with Amity seem to do nothing but make things that much worse. As they grow closer, this closeness is hindered by them being part of two very separate worlds. Can this kid ever get a break?!  I think I tore through this book in a little under two days, it was just that good. And the ending had me reaching for the final installment to find out how this rollercoaster story will end.