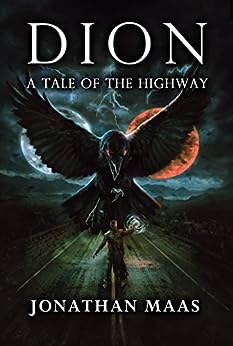 Posted exclusively to Jennlyreads in August 2016

Full disclosure, I was lucky enough to have been provided with a proof copy of this title by the author in exchange for an honest review.

Note – Personal notes and possible spoilers might be revealed at the end of my review. Consider yourself warned.

Coming to, from bizarre dreams of Hell, naked and alone on a highway with all memories erased and not even knowing his name, a man is faced with a car and a note – “Drive until the road ends and then drive some more. If you stop there will be consequences.”  Upon review of the car, it is discovered that the vehicle contains an audio book series of Philosophy by Dr. Julius Shaw, a seemingly endless supply of wine and something alive in the trunk.

How does all of this fit together?

Why is he driving? Where is he going? What happens if he attempts to open the trunk?

As Dion drives and with each transgression his consequences become more and more severe. With each post transgression interlude, another piece of the puzzle is also revealed that brings him closer to solving the riddles with which he is faced.

Earthbound deity or mere mortal? Bringer of extinction or the next level of humanity? The only way to find out, is to travel the path set before him for good or for ill.

“Dion” is the newest book by author Jonathan Maas and is not quite like anything I have read in a long time. While simplistic in its premise, there is a depth and thoughtfulness to the story that takes the reader beyond the confines of the vehicle and the highway and into the story itself. Told in the format of Dion retelling his experience after the fact, the entire novel is footnoted with interjections of his lucid thoughts and insights interspersed with the retelling of the events as they took place. While presented in a manner that allows the reader to include or ignore as they see fit; I found them only an enhancement to the tale being told. The characters introduced are vivid, some tragic, and I even found myself rooting for (or against) a few during my time in the car. Overall, this is another well written tale that, not unlike “Flare”, will have me mulling portions of the story over for days to come.

I kept finding myself wanting Dion to stop the car, get out, try to open the trunk, take a leak, anything that would cause the next transgression because in those moments and within those pages where he lay broken on the highway with his consciousness elsewhere is where we learned the most about his predicament – who he is and what his purpose is.

I also very much enjoyed the “Purple planet” chapter/portion of the book. This by far was probably one of the most “cinematically” written sections of the story. It was intriguing to meet an alien species and see their demise. For me, this was probably the most tragic portion of the book and it also seems to have been the final straw that spurred Dion into decisive action.