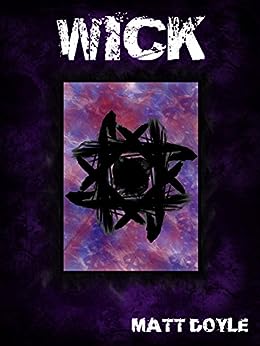 I have attempted to write this review on several occasions now and I always find myself at a loss. I don’t want to give away too much of the story, but if I do one of my standard review formats, I’m afraid I wouldn’t do this story justice. There is so much to be taken from the less than 200 pages of text that I would be hard pressed to keep it all coherent. Following are a few random thoughts and observations that I had while reading WICK; hopefully they will suffice to give you insights to this great read.

The story is set in the year 2916 at a card playing competition. But not cards like Poker or Cribbage.. we’re talking more like Magic the Gathering or Pokémon on some serious steroids! One of the main characters John and his Spark Form, Carnival are defending champions and are at the two-day event to battle other spark formers from all over the galaxy for the title of champion. While Carnival is a Spark Form, she also possesses an element of human qualities and acts as an almost constant companion to John. The action of the tournament matches was presented in such vivid detail; everything from the costumes, to entrance themes and pyro and the announcers calling the events that it was very easy to visualize the spectacle of the tournament.  The promo pieces were also a nice touch, written in such detail and in a way that is not hard to visualize watching them on a large screen or in your home.

I loved the first person aspect of the dialogue as the story progressed by switching from character to character. From John and Carnival to Fahrn and Maria; Meera and Hong Chan to Lana and Finn then on to Connor and whomever he was harassing, each character had a distinct feel, personality and set of issues to explore. Seeing the story unfold through their eyes and their viewpoints added a unique element to the story that helped “non-tournament” plot pieces take a bit of prominence as the day wore on.

I was sad to see that for a story set 900 years in the future, where AI is a reality as is time travel and other technology we can only dream about now, that the human race is still being corrupted by such things as politics and bigotry and intolerance. While this is not necessarily a major theme to the story, the elements are there for the reader to ponder. It kind of makes you wonder if for as much as we advance as a race of people, will these things always be right around the corner to remind us that we are only human?

If you like video games, Cosplay, Anime or wrestling the action in this book will suck you in and the story will keep you reading. If these items are not you thing, give this book a shot anyway as the overall story is strong enough to hold the attention of even the most anti-gamer