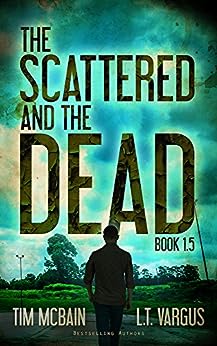 The Scattered and The Dead Book 1.5 is the third book in the series by Tim McBain and LT Vargus. Continuing the story of the survivors of a series of apocalyptic events that wiped out over 99% of the population, this installment focuses mainly on a handful of survivors as they brave the first winter after the mass extinction events took place.

Ex- Televangelist Ray and Lorraine’s story continues in the form of letters written to each other while Ray is out attempting to locate and recruit survivors to their compound. There is also a “pre cataclysmic event” storyline set in Hialeah, Florida which focuses on nurse Marissa and her 8 year old son Tony (possibly the proverbial patient zero in this series) , who has fallen deathly ill and her rush to get him to the hospital before it’s too late.

The bulk of this book centers around Fiona and Doyle who are living in separate cabins in a remote area of West Virginia. With Autumn turning to Winter, Doyle, a widower who lives nearby, brings Fiona wood and other items to help the younger woman make it through the harsh winter months. As the days turn to weeks, a madness sets in that may quite possibly be the demise of the pair.

This was definitely a quick read but it was packed with action. With the focus centering mainly on Fiona and Doyle, I almost found the other storylines being interspersed as a distraction, but not really because they served to break the tension and build suspense for what was definitely the main storyline.  The desolation of being trapped in a cabin in the woods, snowed in with no one else to talk to or no other distractions from the events of the day can quite possibly serve to have a detrimental effect on a person. Fiona’s story illustrates that beautifully. Also with the interspersing of Ray and Lorraine into the mix there is an opening for this story to continue… and continue I am sure it will. It will be interesting to see how Fiona adapts in her new situation going forward after the events of her winter in exile.