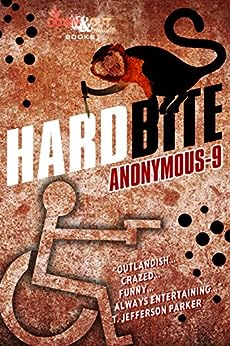 Originally posted to Goodreads on March 22, 2015

I picked up this little gem because it was suggested that fans of Tim Dorsey would appreciate it.

Having read all of Mr. Dorsey’s novels and being fairly burned out on Zombie Apocalypse tales I picked this one up and pretty much tore through it in a day and a half (pesky work and all that)

Dean’s back story of how he became a paraplegic was heart-wrenching and definitely has me taking special care to watch out for pedestrians lest I run into a Florida version of him! Sid is adorable! I want more crazy monkey 🙂 Cinda is a streetwalker with a heart. Her and Dean are kindred spirits. I particularly like, given Cinda’s profession, there aren’t any graphic sex scenes (or any sex scenes at all to speak of). Call me a prude if you want but I don’t like that sort of stuff in my books… especially when there is so much more to write about. With all that being said, there is one question that remains: serial killer or vigilante justice? I guess it’s all in the eye of the beholder. I like to think it’s a little bit of both.

But all kidding aside, the story sucked me in right from the beginning and was fairly fast paced even if I thought it was a tad too short. Love that there’s a cliff hanger ending – that just means that I will be reading Bite Harder soon.

Oh… and the icing on the cake? Anonymous 9 is female. So it’s not just guys who write crazy hard boiled noir thrillers that a sick puppy like me adores.Looking forward to more from Anonymous 9, Dean, Cinda and Sid. 🙂