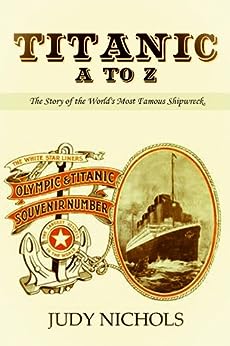 Posted to Goodreads and Amazon February 2013

A great resource to teach the children about Titanic

Being a Titanic fanatic since my youth, I was glad to see this available on Kindle. I picked it up for my six year old and together we read through it as part of his homework assignments.

This book is a great little resource to teach children about Titanic without dwelling too much on the loss of life. Not to say that it’s not mentioned, because it is, but it’s not done is such a way as to cause nightmares or instill a fear of ever setting foot on a cruise ship. In fact, the text has prompted him to ask more questions about Titanic and the wreck, which has fostered a dialogue between he and I regarding what happened and how it relates to our world today.

The book is actually split into three parts. The first is an introduction that tells briefly the story of the sinking; the second being the A to Z and the third, a brief mention of how she was rediscovered by Dr Robert Ballard in 1985. There are also numerous authentic photos to assist in telling her story.

My only disappointment with the book is that part three only touches on Dr. Ballard’s initial discovery. I would have loved to have seen this section more expanded to speak about the other ongoing expeditions to Titanic along with photos of how she appears today. Especially considering that the publication date was April 17, 2012, I feel that the author may have missed out by not adding in more information regarding present day Titanic to commemorate the 100th anniversary.

That is just my opinion though. :)Even without my “wish list”, I still give it high marks.

2 thoughts on “A review of “Titanic A-Z, The Story of the World’s Most Famous Shipwreck” by Judy Nichols”