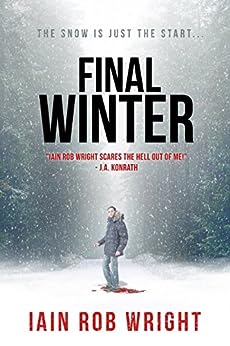 Posted to Amazon and GoodReads – October 2015

Speaking as someone who likes to review from her perception of the book and the story as a whole more than the “literal relevance and grammatical syntax blah blah blah” this was one Hell of a ride.

The story starts with probably the harshest winter ever seen with record snowfalls all around the globe. The main portion of the story takes place in a pub where several people have holed up to wait out the inclement weather. What they did they not know was that the weather was just the harbinger of something more ominous than a little bit of snow. As we get to know the characters, we find out that not everyone is telling everything. While the storm and apparent paranormal activity rages outside, there is also a danger lurking inside.

To not give too much away this really turns into what can only be described as an “epic” (and I HATE that word) battle of good v. evil. The only problem is the lines between good and evil appear to be blurred at points. It’s difficult to know who is who and when you finally find out, it’s usually with a WTF moment. I was literally screaming at my kindle one minute and cheering the next!

The character backstories (for the ones who matter) are fairly well developed. Overall, this was a great read. And one I can definitely see reading again in the future