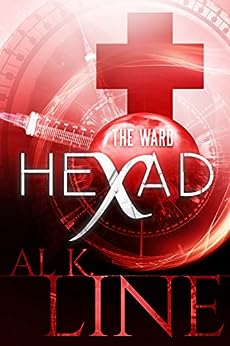 Posted to Goodreads and Amazon February 2016

A fitting end to an excellent time travel adventure

Full disclosure, I was provided a copy of this book by the author in exchange for an honest review.

“Hexad: The Ward” is the third book in the Hexad series by Al. K. Line. The series follows Amanda and Dale on a time travel adventure through alternate universes, getting timelines and each other mixed up and uncovering the secret to the tiny time travel device known as a Hexad (which I imagine would look very similar to a sonic screwdriver). With the direction of a mysterious character known as “The Caretaker”, a neighbor named Peter and their cat Wozzy, Amanda and Dale find themselves Whooooshing through time once again in an effort to stop mass production of Hexads at the expense of countless parallel universe Amandas.

This is definitely a series that you cannot start in the middle and expect to pick up, but this is a fitting conclusion the prior novels (Hexad: The Factory and Hexad: The Chamber). Having become fully ensconced in the story from about the third chapter of the first book, I eagerly delved into this installment and was not disappointed. The story starts fast and continues time hopping along as Dale attempts to rescue Amanda from where she is being held in a sinister ward full of doppelgangers 70+ years in the future. Along the way questions are answered, more are raised and the conclusion will leave you thinking weeks after you finish reading.

I highly recommend the Hexad series for anyone who like Sci Fi – Fantasy and is not afraid to get a little sideways in their story lines.