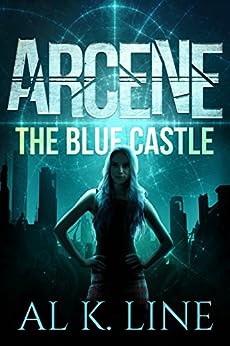 Who ever thought bunny socks and pigtails could be so badass?

Full Disclosure – I received a free copy of this book from the author in exchange for an honest review. Having previously read the Zombie Botnet series and eagerly awaiting the next installment of Hexad, I am familiar with Al K. Line’s work; so I was eager to tear into his latest offering.

Set 300 years in the future after most of the population has been wiped out by a plague of sorts known to the survivors as “The Lethargy”, this book follows Arcene from the Commorancy series as she leaves her home and son behind and sets out on an adventure. Armed only with her sword, bunny socks and her trusty dog Leel she is ready for adventure. While exploring the wild, she happens upon a large castle painted blue with no apparent way in, and things just get stranger from there. She meets a former resident (read: escapee) of the castle, a young boy named Beamer, and agrees to take him back home. What she experiences when she gets there sets off a chain of events that sees her returning to the Castle to deal with the twisted Twin rulers and centuries of perverse tradition.

Overall, I would rate this 4.5 stars. Starting out was slow, mostly due to the fact that this was my first physical (non kindle version) book that I read in almost 5 years but it quickly picked up once I got my bearings. The whole concept of being “Awoken” and some of the additional attributes one gains when Awoken was fascinating. The Castle, the Twins and the inhabitants could easily have been a series of books all its own. The brief history that was explored at the castle and with others was fascinating and heartbreaking. Also, as I have come to expect with any good story, there were a few <gasp> ”OMG!” moments which only made me read that much more and faster.
Not having read the Commorancy, I wasn’t sure what to expect when I began but it became very clear early on that while this book may be set in the same “world” as Commorancy, it could also be considered a stand-alone story. It will be interesting for me to read this one again at a later date after reading my way through the parent series and seeing how much more I glean from the story that I wasn’t clued in on this time through.Overall a great start to what I hope will be a new series. Maybe this won’t be the last time Arcene visits the Blue Castle? Thanks, Al – it was great! 🙂