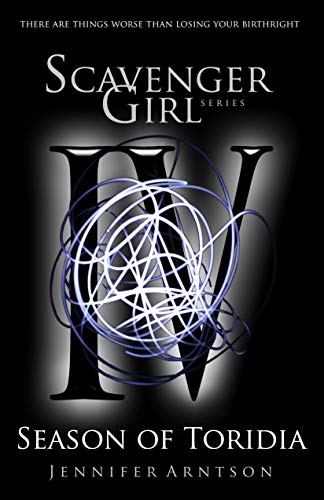 Season of Toridia continues the story of Una of Ashlund. With the rains of Hytalia behind her, Una finds herself probably in her most challenging role to date. As the wife of the Junior Lord of Authority, Una is suddenly in a position of status and power and she does not like it. As the Citizenry attempts to recover from the landslide that devastated most of Ashlund, Una is sequestered behind gated walls, Lady of a home that is not hers. For her Scavenger heart, this is probably the most difficult thing. All around her people are suffering, but the Authority types in the stolen neighborhood do not give it a second thought.

When Una resolves to help the Citizenry in any way possible, she is met with resistance on many fronts, but she intends to press on.  It is only when she and Marsh encounter a new adversary more brutal than the Authority ever has been, Una’s world is turned upside down yet again. Now having another title and heavier responsibilities bestowed on her, Una tries to build a life for herself and her growing family outside the Authority’s walls. But the battle for Ashlund is in full swing, and she finds herself caught right in the middle. With ties to all warring factions, Una may never be able to live securely again.

The action in Season of Toridia is as hot as the dry heat of Ashlund as Jennifer Arntson delivers with another great installment in the Scavenger Girl series. Still recovering from Hytalia and the landslide that laid waste to most of Ashlund, people are grasping at anything to survive. In the blink of an eye, the privileged have nothing and are no better than the reclaimers they once shunned. Una, as the wife of the newly minted Junior Lord of the Authority, finds herself uncomfortably on the other side of that coin. After a lifetime of lack, she now has everything that she could ever want, including people to wait on her hand and foot, and she hates it. Una really proves that for all the bad that a person can endure, the truly kind still maintain their humanity. This is best displayed in the violent scene with the Woodsmen and the orphaned children. Throughout this series, I have often imagined myself as the character of Una and to be honest, I seriously had a hard time with that scene as I would imagine many readers did!

The addition of the Woodsmen, the mysterious rulers of the shade in the hottest season on Ashlund was a nice way to advance the story and also introduce a new player in the growing battle for Ashlund’s future. While not quite as brutal as the Authority, the Woodsmen have cultivated their own flavor of violence that would be just as bad if not worse than the Authority if applied to the citizenry. The Resistance also is still playing a role in covert ways and it is apparent that there is a real power struggle going in with Una right at the heart of it.

For me, as far as a story progression goes, I think that Season of Toridia has unseated Season of Talium as my favorite book in the series thus far. Many questions were answered with this book, but with their closure, new questions have arisen.  Staying true to the series thus far, at the close of Toridia Arntson has wrapped up the main story plots to where if another book were not on the horizon, I would feel a sense of satisfaction with the story thus far.
With all the action that has built up through the previous four seasons, and the threads still not tied up the final chapter in Una’s story, Season of Zoetica promises to be the most explosive yet in the series. I am eagerly anticipating being witness to the final battle for Ashlund and I know it will not disappoint.