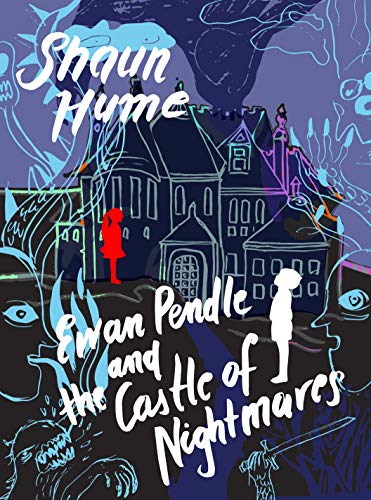 Full disclosure – I was provided a copy of this book by the author but have voluntarily provided a review. All opinions are my own.

Ewan Pendle and The Castle of Nightmares is the follow-up, Ewan Pendle and The White Wraith by Author Shaun Hume. Having survived his initial year at Firedrake Lyceum, Ewan is eager to be reunited with his friends and get started with his second year of schooling as a Lenitnes cadet. As the second-year cadets return to school, the air is tense with anticipation to see what clique they will be invited to join. For Ewan, Mathilde, and Enid it seems like a stroke of luck to all be placed together in the Vanguard clique, but they have no time to revel in their good fortune as Master Whitewood immediately begins their training. Schooling is not the only thing on Ewan’s mind, however, thanks to a reoccurring nightmare of a young girl trapped in a castle somewhere in the mountains. Could it be that this once thought orphan isn’t an orphan after all? Is the subject of his nightmares a sibling, and why hasn’t Master Whitewood disclosed any of this information to Ewan? All these questions set Ewan down a path that sees him traveling out of the walls of the Lyceum in search of truth, but what he finds may change everything he has ever thought to be true.

I was eager to read the second book in this series and continue the story of Ewan and his friends. Where Ewan Pendle and the White Wraith mainly set the stage and laid the groundwork with the back stories of many of the characters and the Lyceum, The Castle of Nightmares dove right in with the mystery and intrigue. Ewan really has a lot to deal with in this installment. From the nightmares, mysterious meetings with condemned criminals, and impromptu rescue missions to places unknown, it’s a wonder that he had time for classes. Throughout it all, Ewan receives hands-on experience that the classroom could not teach and learns who his true friends are. I was particularly drawn to this series after having been a fan of Harry Potter and while the Ewan Pendle series bears a few similarities this done by design, and Hume has crafted a world that will make even the most rabid Potterhead happy, including a few well placed “Easter eggs”. With year two ending, Ewan’s life may be the most confused it has ever been. Once the Lyceum reconvenes for Ewan’s third year of schooling, I expect nothing to be the same and am very much looking forward to seeing how Ewan navigates his new reality.