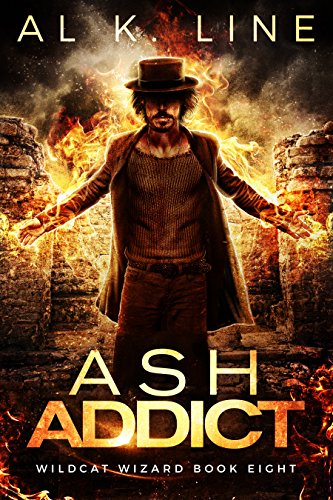 Full Disclosure – I was provided a copy of the book by the author as a member of his “A-Team”, however, have voluntarily chosen to write a review. All opinions are my own.

Ash Addict is the eighth installment in the Wildcat Wizard series of adventures by author Al K. Line. In this one, we catch up with Arthur, George, and Penelope six months after the close of Kinky Bones. The Hat seems to have settled into a more domesticated life with Penelope, but he is restless to get back into the thick of things as evidenced by his growing obsession with summoning demons in his barn. When he delves into an ancient, almost taboo art involving ash he is visited by a strange ancient vampire who claims to be the son of Mikalus. Tasius is not there by chance, however; he knows about Arthur’s past and he is determined to compel the wizard to recover the ashes of the patriarch First vampire. Unfortunately for Arthur, Tasius and his strange band of disciples aren’t the only ones who are after the ash, Cerberus is also seeking to obtain the remains of the most powerful vampire in history and Carmichael will stop at nothing to get what he wants. The question is, does Cerberus seek Mikalus’ remains in order to lock it away with the rest of their pilfered artifacts, or is there a deeper reason?

For as absent as Cerberus was in Kinky Bones, they have come back with a vengeance in Ash Addict. There are several factions vying to obtain the remains of Mikalus using all manner of violence, torture, and nefarious means to get their prize. If they succeed, it could mean a vampire reign that would affect not only the wizarding community but the entire population. Thanks to Ivan, Arthur finds himself thrust into a battle like none he has ever seen, when it’s Vampire against Wizard in a no holds barred fight to the finish. If that weren’t bad enough, The Hat gets a small taste of betrayal from his own camp, which sends him for a loop and makes him question his close alliances. There are also a few interesting hints at Arthur’s past which has made me all the more eager to read the future installments in this series. While Ash Addict does build on the overall storyline, it is written in a way that also works well enough as a standalone. If you’re not familiar with this series, this could easily be read without missing too much of the backstory. While the book ends on a semi-calm note, it’s clear that Arthur still has unfinished business and unanswered questions that hopefully will be explored in “Death Calls”, the upcoming ninth book in this series.