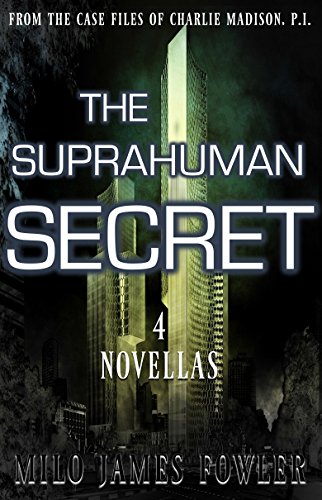 A futuristic detective series with a distinctively classic Noir feel
Previously released as 4 separate novellas, The Suprahuman Secret , by author Milo James Fowler details the previous case files of Private Detective Charlie Madison in one convenient tome. Although the main action takes place in a future world where automatons known as mandroids are deployed to fight wars and most everyone has a handy LinkCom either implanted or mobile much like the latest iPhone there is still a hint old the classic Noir that harkens back to Bogey’s Sam Spade movies. Charlie Madison is probably the last remaining Private Detective in his Russian controlled corner of the world. (Isn’t it amazing that after everything and with all human advancements organized crime still manages to survive?) In Madison’s world, after the “great diaspora” the Eastern Conglomerate has pretty much taken major portions of the world. With immigrants and refugees flooding into the Unified States the area sees a fundamental change is its ethnic make-up with the Russians pretty much owning the landscape and the Asian nations relegated to hastily constructed slums and settlement in the outskirts of major suburban areas. With the various nations of the planet competing for supremacy, all manner of shady dealing was tolerated if the means justifies the ends.

While Fowler initially doesn’t indicate which area of the Unified States Madison operates this is left open to the interpretation of the reader. For me, I can easily see the setting as parts of New York or maybe even California. It was only after reading the majority of the book that the main location is finally revealed.  The book encompasses four previous novellas and is touted as the case files of Madison.

In the first short entitled Girl of Great Price – Madison is sought out to seek the adopted daughter of a military veteran who was apparently kidnapped by the Russians. Only after he takes on the case does he learn that all is not what it seems, and this girl is more unique than he could ever imagine.

The second novella Immaterial Evidence sees Madison resuming life now in exile in Little Tokyo. With a price on his head from Ivan and all his hired goons, the Japanese sector seems to be the only safe place for him. But when items and people mysteriously start disappearing with no explanation, Charlie must return to his home town to get to the bottom of the disappearances. What he discovers could escalate the current global cold war back into a nuclear danger.

The third novella Yakuza Territory sees Charlie coming to the rescue of Sergeant Douglass as the duo spends the night in lockdown to ensure a Russian mob member cannot escape before the Marshals arrive to take custody. The Graveyard Watch has never had such an implication before as the duo battle the mafia and their mandroids in an attempt to keep them from rescuing their suprahuman member.

For Chimera Effect, the final chapter in the case files, Charlie is visited by Okada and Sanitoro at his office. The duo has braved leaving Little Tokyo to enlist Charlie’s assistance in rescuing Okada’s activist nephew from a Federal Detention center. Sanitoro and Charlie team up to travel back to Little Tokyo to locate and track the Blackshirts to the possible internment facility in the Wastes and rescue the youth. After a treacherous ride in, the successfully locate Yoshiro, but he is not the same person he was. Getting out of the Wastes alive may take off of Charlie and Sanitoro’s tricks.

Reading through this series, I found myself transported to a world that was part Terminator and part Maltese Falcon. Charlie is the classic gumshoe living out of his office with Wanda his femme fatale assistant and loyal confidant. It is very easy to picture Charlie with a classic fedora reminiscent of Humphrey Bogart, and I do believe I caught a smidgen of a Casablanca reference a time or two as well. Wanda, as his Girl Friday, is the typical blonde bombshell, but underneath that pretty exterior is a smart gal with an aptitude for navigating the current tech that their world is saturated with. Charlie’s world is the acid rain ridden ruin of a California town in a post war world where nations fight for dominance, organized crime is alive and well and if you are Anglo you do not want to be caught in Little Tokyo after dark.  Fowler’s balancing of the old and new serves this series well, with the old not seeming outdated and the new not feeling too futuristic. Having read all four books in the space of a few days, I did notice a little bit of repetition with certain descriptions however keeping in mind that these were previously separate releases over several years, this did not bother me. Rather it served to reinforce the world where the action takes place. Also, while all novels worked together to tell a larger story, all also works as stand-alone offerings. Fowler is currently working on the fifth and final installment in this series called The Gifted Ones” and I for one will be waiting to catch up with Charlie again for another Case Closed.

If are a fan of noir, science fiction, dystopian or fantasy you may want to give The Suprahuman Secret – Collection a read. You will not be disappointed!