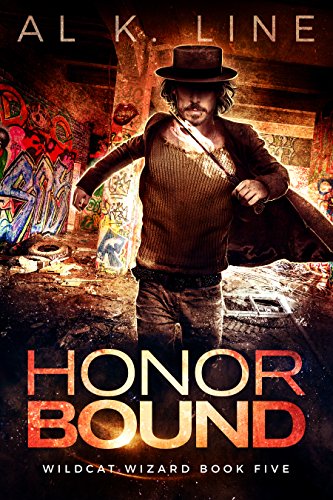 Full Disclosure – I was provided a copy of the book by the author as a member of his “A-Team” however have voluntarily chosen to write a review. All opinions are my own.

Honor Bound is the fifth in the Wildcat Wizard series of novels by author Al K. Line. Taking place roughly nine months after Angel Eyes, Arthur’s life has finally resumed a semblance of normalcy. Vicky and the girls have been moved to a swanky new house provided by big brother Ivan and Arthur has even started a budding relationship with shifter coffee house owner, Candy. All seems to be well indeed, and that’s usually when things start to go sideways. Ivan, at the request of Mikalus approaches Arthur with a personal request from the vampire First. One last job – one last favor and then all debts will be paid. In the recent months, Cerberus and their newest head Carmichael have become increasingly more aggressive in their quest to obtain all items magical for inclusion in their vault. Mikalus seeks to regain what’s rightfully his, but this will not be an easy task even if the spoils will be great. Arthur assembles a who’s who of magical muscle, but it’s only too late that he finds out that there is more at stake than a few musty old books. Getting out of this mess may be the end of Arthur, Vicky and everything he holds dear.

Honor Bound is packed with action and for me this was probably the darkest of the Wildcat Wizard books thus far. Arthur puts everything on the line to take this promised last job for the vampires and he is determined to make it worth his while. Cobbling together an impressive list of accomplices and associates (think “Ocean’s Eleven – Hat style) Arthur and Vicky have planned the perfect heist, but of course nothing is perfect in Arthur’s world. Watching the Hat navigate the aftermath and various bombshells (both literally and figuratively) that are thrown his way only serve to make him more determined to end this one way or another. While mostly a dark story, there were still some great comedic bits as well with the introduction of Wand. I love Wand! He’s like the mouthy little devil on your shoulder saying all the things you wish you could. I hope to see Wand play more prominently in the next installment and the future books in this series for as long as it lasts. Considering the next book currently has a working title of Lost Hope, I’m expecting the darkness to reach levels even higher (or lower?) than what Honor Bound brought. Hopefully Vicky, George, and Wand will be there to keep Arthur from meeting Death for the final time.