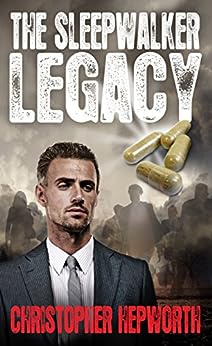 The Sleepwalker Legacy is the first book in the Sam Jardine thriller series by author Christopher Hepworth. Sam Jardine is a negotiator for a computer company, but when he finds that negotiations have gone awry he is on the run in Beijing attempting to get out of the country. As luck would have it, he is picked up by Rachael Beckett, the well-connected granddaughter of a pharmaceutical company. Before he knows it, Sam becomes the newest employee of Napier & Beckett pharmaceuticals.

The more time Sam spends at the Napier & Beckett research facility, the more he learns of a dangerous drug called Berserker that renders the user in a state of aggression and blood lust that, if not countered quickly will result in a lifelong ailment called “The Sleepwalker Legacy”. To make matters worse, the US Government is set to weaponize berserker for a tactical advantage against the enemies of the United States. With the trials of the antidote suspended, the possible repercussions of this action could set modern civilization back centuries as soldiers who have used Berserker return home with what can only be described as an extremely violent form of PTSD. At the urging of his girlfriend and hereditary Sleepwalker Legacy victim, Sam vows to do whatever he can to keep Berserker from ever seeing the light of day.

The backstory and history behind The Sleepwalker Legacy and the advent of the Berserker drug spans 200 years and several continents. From a medicolegal/phychological standpoint, “The Sleepwalker Legacy” is an intriguing read. Hepworth crafts an intricate tale of war, love, greed, corruption and redemption that will leave the reader thinking. The Napier & Becket research facility itself is a very interesting place. With top floors reserved for offices and the “public face”, the lower levels house various study wards reminiscent of standard mental asylums with human guinea pigs for the various pharmaceutical trials. Sam’s ability with Cassie’s help to get down into these levels and interact with the test subjects added a very interesting element and kept me guessing as to Sam’s true role in the story. At times, particularly with Sam’s interactions with the patients in the research facility I couldn’t help wondering if Sam wasn’t also inflicted with a mental illness and we were watching the fruits of his delusion. This was particularly vivid for me with his interactions over company instant messenger with certain patients of the Ward and the faceless “Jacques”.

While “The Sleepwalker Legacy” is a complete standalone novel, this is also the first in a series of books to feature Sam Jardine. It will be interesting to see how much of the issues that plagued Sam during The Sleepwalker Legacy carries forward into the future novels. While Sam is touted as a brilliant negotiator, it feels that we have only scratched the surface with Sam as a person and what makes him tick. It will be interesting to see what other adventures are in his future.