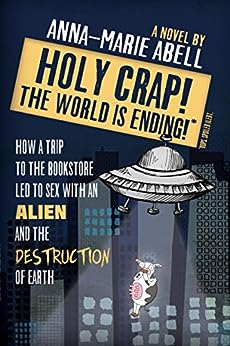 A hilarious end of the world adventure

Full disclosure – I was provided a copy of this book by the author however I have voluntarily chosen to write a review. All opinions are my own.

Autumn is your typical semi socially awkward twenty something living in Southern California. Working for an advertising agency her favorite free time activity is her regular pig out sessions with her bestie artist Emma. On one such pig out eve, Autumn makes a quick stop at the local Barnes & Noble to look for a book on Light Beings when she encounters the most incredible specimen of manhood she could ever dream. Dubbing him “New Age Guy” due to his placement in the exact section she was headed for, Autumn becomes obsessed with this guy and after telling Emma about him is determined to find out more about this mysterious man.

Aptly named, Rigel has come to Earth from the planet Nibiru as an observer to the inevitable collision of one of his planet’s moons into Earth. Rigel also finds himself inexplicably drawn to this quirky Earth woman and seeks out more interaction with her against the wishes of his own kind and at the peril of death. Tossed into a forbidden whirlwind romance with an alien, Autumn is warped into the middle of her own space odyssey as she finds herself among alien spaceships, conspiracy theories and eons old prophecies that may result in her own demise. The race is on to save the human race with Autumn the most unlikely of saviors.  Is there at least time for one more Twinkie?

Holy Crap! The World is Ending is the first book in the Anunnaki Chronicles by Anna-Marie Abell and takes the “end of the world” story line on a whole new journey. What if humans were created by alien life forms to do their bidding? What if alien life forms have been working with the Earth’s governmental superpowers all along and their existence has been kept a big secret from the rest of the Earth? Just how strong is number 12 hairspray and why are there so many darned Wal Marts all over the place? Holy Crap attempts to answer these and many more burning questions in this hilariously brilliant read.

Anna-Marie Abell has succeeded in weaving her years of study into in the ancient Sumerian culture and their gods with common conspiracy theories, pop culture and random human quirkiness into an out of this world end times romp that will have you laughing out loud at the most inappropriate times and possibly even shedding a tear or two before it’s all said and done. I couldn’t help but notice the politics of the politics of the Anunnaki to be eerily like that of Earth. At one point, there is a protest on Nibiru that could easily have been Anycity, U.S.A. Little things like this for me made this less of a super heavy Sci Fi book and more of a “Hey, look at that, what if they are like us!” sort of book. Another thing that really stood out for me was the addition of real people, places and podcasts to the narrative. This clever addition works twofold and functions a primer of resource material for those who find the Anunnaki intriguing. I, for one, have taken a deeper look at a few of her sources since reading this book. With this being the first in the Anunnaki Chronicles, Abell has set the bar high and it will be interesting to see where the Chronicles go from here. If this first book is any indication, it will be well worth the read.