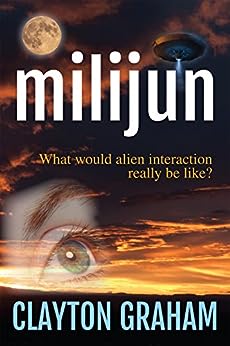 Alien invasion from a unique perspective

It is the year 2179. Man has successfully harnessed the surface of the moon for mining and research. In one such cave, miner Simon Cordell stumbles across an interesting anomaly seemingly embedded in the cave walls. Possibly hundreds of never before seen beings are nestled in this lunar cavern. Soon after reporting this strange possible alien life form and obtaining a specimen for research, the entire lunar research facility falls prey to a massacre with Simon the only survivor. Simon needs to get to the main lunar base with the lifeform intact or risk being blamed for the slaughter of his colleagues.

At the same time on the Nullarbor in Western Australia, Laura and Jason Sinclair are en route to a much needed camping vacation. On the final leg of their journey, Jason photographs a curious formation in the night sky. When he attempts to view his discovery closer at the ranger station, he is abducted. Laura frantically searches for her son and is able to recover him but in the process, finds herself and Jason implicated in several murders by the local police officer who, also seems to be acting very strangely.

Now on the run, prime suspects of a double murder Laura and Jason find themselves tirelessly hunted, not sure who to trust. Finding possible allies in a strange underground complex of scientific researchers Laura and Jason, with their assistance, attempt to work with a local military unit to prove their innocence while at the same time attempting to convince those in charge of a possible alien invasion. Throughout their trials, Laura and Jason find themselves traveling all over Australia and beyond in this unique take on alien encounters and interactions.

Milijun, is the first novel by author Clayton Graham and I for one hope it is not his last. Having read only a handful of science fiction novels where aliens were the focus, I must say that Milijun tackled this from a very interesting angle. What if the alien invasion wasn’t meant for domination, but for another reason entirely? What if the alien lifeforms weren’t acting in aggression, but in defense of human actions?

Considering technological advancements currently and in the future created by Graham it makes the reader ponder if there is more out there than just us. In Graham’s world, we see a depth of technological advancements within the military and the Miljun center that speaks to the advancing technology of the future. At the same time, there is talk of a last “Great Conflict” that has yet again divided the world and the country of Australia specifically which goes to show that for the more things change, the more they stay the same. As the narrative progresses and story lines come together it becomes apparent that Jason and Laura may play a much bigger role in the survival of the human race than they had ever imagined. While the story does leave a few loose ends, it is more of a thought provoker than it is a cliffhanger but still leaves the reader curious to learn what happens next with Jason, Laura,the other survivors and the Earth.

If you like Science Fiction, alien invasion and futuristic reads, Milijun is a definite recommend.