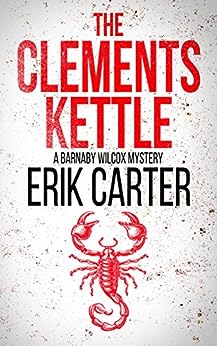 Full disclosure, I was provided a copy of this book by the author however I have voluntarily chosen to write a review. All opinions are my own.

“The Clements Kettle” is the first in the Barnaby Wilcox Wild West Mystery series by Erik Carter. Set in the fictional town of Desecho, Arizona, Barnaby is a private investigator and reluctant part time Deputy. Disenchanted with the lack of business in the mostly outlaw town, Barnaby is contemplating packing it in and moving on.  When he is visited by Lilly Cosgrove, the daughter of the richest person in town, things start to look promising on the business front.  Lily’s father has been kidnapped with the ransom note only asking for the “Clements Kettle” as payment for his safe return.  Lilly’s attempts to satisfy the ransom are waylaid when a band of masked outlaws steals the kettle from her. Now she needs Barnaby’s help to recover both the kettle and her father before the kidnappers go through with their threat to kill him.

As a rule, I am not a huge fan of the Western genre. As a matter of fact, I can probably count on one hand how many Westerns I have read in my lifetime. I usually leave the Cowboys and Indians to my dad, while I stick to more fantastical genres. When the author initially contacted me regarding “The Clements Kettle” I was intrigued and ready for a change of pace. I must say that “The Clements Kettle” was a breath of fresh air and a really good read. Desecho, is pretty much what I would have imagined in a wild west town. From Fannie’s Funhouse to the general store, many saloons, the lone Sheriff and other outrageous characters it was very easy to picture the overall atmosphere of dusty streets, hot days and cold desert nights. Barnaby Wilcox as the town gumshoe was a bit of a departure, or at least not what I expected. In fact, Barnaby has sort of an old school Noir feel about him that I really liked. The entire opening scene when Lily comes seeking his service was reminiscent a classic Hollywood movie and it worked. Underneath all of this was a tinge of comedy that ran very subtly through the entire book. Bob was a hilarious addition as Barnaby’s stubborn and steadfast friend and sidekick. On more than one occasion, Barnaby found himself in a few predicaments that had me smiling and even giggling uncontrollably in a few inappropriate places.

All in all, “The Clements Kettle” was an entertaining ride through the Old West. I’m glad I gave it a read, and wouldn’t mind returning to Desecho and Barnaby Wilcox’s domain in future for more adventures and mystery with this crazy cast of characters.