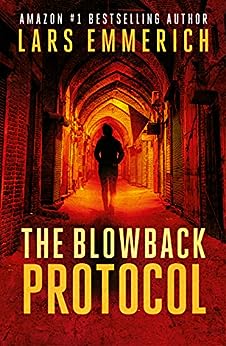 Full disclosure, I was provided with an advanced copy of this book from the author however I have voluntarily chosen to write a review. All opinions are my own.

Caught in the crossfire

A child is dead. Caught in the crossfire of a shootout with a terrorist in the heart of the nation’s Capitol   Homeland Security agent Sam Jameson is blamed for her death and why not; Sam also blames herself. As the head of the operation to bring the “Doberman” group down, Sam made the call to open fire, ultimately resulting in the death of a bystander. With her current position suspended pending a full investigation, Sam retreats to the safety of her home to regroup and lick her wounds but soon finds herself on the run when she discovers that her state of the art security systems have been breached. Coincidence? Sam doesn’t think so as she becomes an international fugitive trying to track down the clues to determine who is setting her up and why.

The Blowback Protocol has got the be the fastest 448 pages I have ever read. Sam Jameson is back and better than ever in this newest thriller. Set some time after the global financial crisis depicted in the author’s recent “Devolution Trilogy” it appears that the crisis has passed and the world continues as it always has. There are a few familiar names and faces that reappear from previous novels, but this does not detract from the current story. “The Blowback Protocol” is a standalone novel and can be read without the reader feeling as if they have missed out on any critical plot points. Corruption is the theme of the day as Sam discovers just how vast and far reaching the corruption can be. What appears to be just a simple operational “error” is only just a small piece in a larger web of lies, deceit and subterfuge.

Overall, “The Blowback Protocol” is an excellent fast paced thriller that, if nothing else, will have me looking at the typical career politician types in a more cynical way than I already do. If the current inhabitants of D.C. are a fraction of what are depicted by Lars Emmerich, we are all in trouble!  Sam Jameson it a strong, ballsy heroine that still has a heart that can be broken. I am looking forward to whatever her next adventure may be.