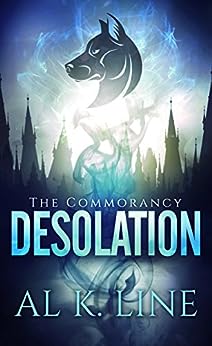 Desolation, the conclusion to the Commorancy series, finds Letje, Gamm, Arcene and Leel on a Journey to face former guest Artek as he is discovered as the reason for the population’s decline.  Stockpiling the remaining UK population, Artek fancies himself the ruler and savior of the post Lethargic world. Goaded by his mother Malessa, Artek uses his awoken abilities to enslave the country’s populace as he weeds out all but those he deems acceptable for life as subjects under his new rule. If this weren’t bad enough, Artek apparently is also smitten with Arcene, and will stop at nothing to make her his Queen. Letje and friends are in for the fight to end all fights if they are to stop this final menace, not only to the Commorancy, but to the entire human race.

If there were any other way that this story could end, I am not sure I would have enjoyed this series as much as I did.  Getting to know the full extent of Artek and Malessa’s plan of domination and then watching it play out gave me the chills as it conjured visions of would be world conquerors past. The level of his obsession with Arcene is chilling and sets the stage beautifully for the Arcene we are reintroduced to in the later novels bearing her name. The exchanges between Marcus and Fasolt as they remain behind to ensure the Commorancy remains running as usual, while seemingly insignificant on the surface are actually very insightful. It is safe to say that there is no wasted text in any of these novels as what may appear to be a passing comment may very well be the start (or finish) of another story all together.

Highly recommended and a series I will definitely revisit in the future to see if anything new jumps out at me that I may have missed in this first read.

**Final thoughts and possibly some unintended spoilers so consider yourself warned**

Upon completion of the Commorancy series, I have now read all books by Al. K. Line to date and as far as independent authors go, he is definitely one of my favorites. I love how he can weave a tale of almost impossible circumstances and have you hooked from the first word. Not only that, the continuity that he maintains through three different series set in the same “post Lethargy” era is astounding.  I absolutely love that Edsel has his closure from the INK series… even before the fact apparently, since INK was written after the Commorancy. When I was reading INK I couldn’t help but feel that Edsel got a “raw deal” at the end, so his appearance in Desolation was probably one of the best surprises of the entire series.  As I told the author in an email, I think I even shed a happy tear.

I am pretty sure I will be going through Commorancy withdrawal for some time now. Not a bad thing, I guess. J   At least I will have all of his new books to look forward to.