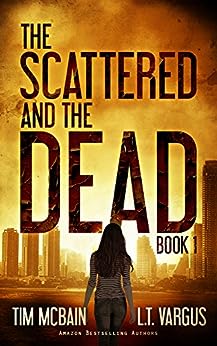 The apocalypse has many faces

The Scattered and the Dead is a brilliantly written take on what can only be described as several apocalyptic events occurring simultaneously to wipe out over 99% of the Earth’s population. The story lines and timelines, ranging anywhere from the virus’s initial inception 68 days before to roughly 9 years after, follow what appear to be a random series of survivors as they navigate the current state of the world.  The action seems to be centered mostly in center of the US, which leaves the reader to wonder about the state of the country as a whole or the entire world for that matter. From Mitch, a family man only trying to find a safe place in a world gone mad for his two sons, to a mysterious shrouded character known to us only as “Baghead”, the stories while seemingly appearing unrelated weave together to tell a chilling tale.

While a few of the storylines come crashing together as part of the chilling conclusion, many are left in limbo.  I am interested to see how the other stories weave into this overall landscape of the post-apocalyptic world according to McBain and Vargus