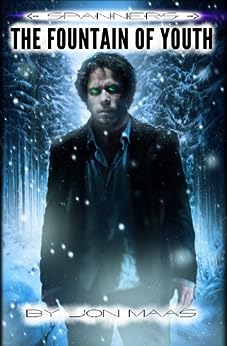 Imagine having a lifespan of only six months? What would you do? What about being immortal? Would you use your time on earth for good or for ill?

These are the questions that face Spanners – people who do not live their lives sequentially but in differing timelines and with different abilities, strengths and weaknesses. Spanners often look normal and integrate with society but others tend to stay away from humanity for theirs and societies own good.

Adam Parr is what is called an immortal Spanner. As an immortal, he doesn’t die and he’s not really afraid of much…. except being buried alive. For an immortal spanner this is a fate worse than death.

When a longtime adversary escapes his underground prison and begins to amass an army to capture the Fountain of Youth and usher in a Utopian society Adam, with the help of his siblings and an old friend must attempt to raise their own army to defeat him.

Having read two other books by Jon, this one is nothing like his other works. Spanners sort of reminded me a tad of X-Men, but way more bad-ass. The different classes of Spanner and their character traits and abilities added a level of depth to the characters to help flesh them out and make the story even more interesting. Seeing the budding friendships/relationships develop also helped to show that even though they may be different, even immortal in some case, they are human. In the end the story resolved just enough to give closure to this book but also leave the door open for more Spanners to come.

All in all, a great read. Looking forward to seeing what else is in store for Adam, Mayfly and the others.