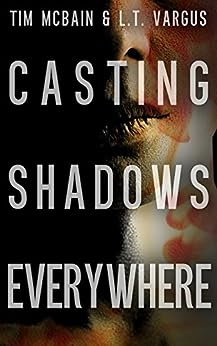 When Jake was 9, he witnessed his then 17-year-old cousin Nick attack and choke out another kid who was bullying him.  Several years later, with no father figure to help him through his teenage years, Jake turns to Nick again in an effort to learn how to survive high school life. What he ends up learning is how to enter a life of crime one “lesson” at a time.  What he discovers about his cousin along the way takes him down a path he never expected.

Written in a style reminiscent of a personal journal or diary, Casting Shadows Everywhere is brilliant. The scenes and situations are narrated from the perspective of a teenage boy and is very effective. From hanging out with the girl he has a crush on to musings about an AP Psychology class the story is engaging and thought provoking. I loved the left brain/right brain parts as it shows us that while he may be still a “kid”, Jake is very smart.

Once I started this book, I found it difficult to put down and I think this may have been the fastest I have ever read through any book. Getting inside Jake’s psyche through his journal entries and experiencing the impossible situation he finds himself in though his eyes really helped me feel for him. A well-deserved 5 stars and definitely a book I can see a second read down the line.